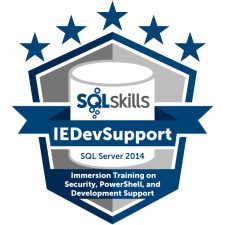 Upon completion: students will receive a verifiable badge through Credly/YourAcclaim.com

(Retired – no longer offered as a public class)

This 5-day SQL Server training class is designed to give a solid grounding for database administrators in topics related to development support, security, and scripting with PowerShell. Security is an area that is critical in today’s environment and all DBAs should be able to secure a SQL Server installation, and the class spends almost two days on security best practices from A to Z. The addition of days on PowerShell and security provide coverage of areas that have more recently become requirements for production DBAs but are not traditionally covered in “DBA” classes. The course also covers a wealth of developer support topics, with the focus on best practices for configuration and security, planning, and supporting these features in a production environment, rather than in-depth coverage of how to program (covered in the developer immersion event) with the features.

Need Help Justifying Training? Here’s a letter to your boss explaining why SQLskills training is worthwhile and a list of community blog posts about our classes.

Part 1: Setting Up and Managing a Secure SQL Server

This section covers optimization of procedural code rather than optimization of individual T-SQL statements. It also covers plan caching in detail and achieving plan stability.

The first task for securing a SQL Server instance is to choose the service account and other configuration parameters to limit the surface area. Topics covered include:

Authentication is the process of identifying yourself to the database instance. Before you can perform any operation in SQL Server, you must be able to log in. Logins in SQL Server can use Windows (Operating System) accounts or SQL Server-specific accounts. In addition, some special functions like SQL Server Service Broker use certificates for authentication. Topics include:

Once you’ve identified yourself to the database, you need to be granted privileges before you can access any data or perform system functions. This is accomplished through the GDR (Grant-Revoke-Deny) verbs. SQL Server 2005 instituted the concept that all permissions are grantable using GDR. This module’s topics include:

One of the major topics of discussion when making a database secure is SQL injection. We’ll go over rules and best coding practices to prevent SQL injection in this module. In addition we’ll discuss execution content for procedural code, ownership chains, and the hazards of dynamic SQL. We’ll also explore a new SQL Server 2005 feature that permits you to assign permissions by signing code with a certificate or asymmetric key. Topics covered include:

SQL Server 2008 adds granular auditing capabilities to the already strong auditing functionality in SQL Server. This module will examine auditing in detail, C2 and Common Criteria Certification and setup, and suggest some best practices for maintaining a database at its safest level and troubleshooting security-related problems. Topics covered include:

Module 1: Introduction to the PowerShell Language

This module covers the PowerShell scripting language constructs. We’ll be using PowerShell V2, which adds a number of enhancements like modules. You’ll learn to work with primitive types, .NET objects, WMI, COM and PS objects in PowerShell, and well as how to use the PowerShell pipeline to pass objects between commands and operators. Topics covered include:

In this module we’ll dig into the SQL Server-specific support for PowerShell, introduced in SQL Server 2008. There is a great deal of scripting functionality covering all aspects of the SQL Server product. Topics covered include:

Although all applications will use T-SQL and traditional database objects, non-traditional programming models and extended functionality is continuously being introduced. This section gives administrators the background they need to manage the objects and data that are unique to these non-traditional programming models. For each model, we’ll cover the technology, how it affects the rest of SQL Server and technology-specific optimization and troubleshooting techniques.

This module covers the internals of how SQLCLR works in SQL Server to give you the knowledge to architect, manage, define, and troubleshoot SQLCLR-based database applications. Because SQL Server procedural code (stored procedures, UDFs and triggers) can now be written in T-SQL or .NET languages, we’ll also focus on what happens when .NET CLR code accesses the database and discuss which coding language is a better choice for a given problem. Topics covered include:

This module covers XML functionality choices in the SQL Server relational database, including the XML data type, schema and query along with XML indexes. We’ll look at how each of these components work internally (with examples) and how to define and use XML-based persisted computed columns for best query performance. Finally, we’ll explore the internals of XML indexes and describe the best practices with respect to XML query performance. Topics covered include:

We’ll cover the basics of the spatial data type concepts so that DBAs can assist in planning and implementation of spatial databases. This includes the difference in geometry and geography data types, the internals of spatial indexes and how to implement the best strategy for indexing, as well as the using the spatial diagnostic stored procedures that will ensure that you employ the best indexing strategy. Topics covered include:

In this module, we’ll discuss the individual components that comprise full text search, as well as how to define and manage full text catalog, indexes, and other database objects. This includes a discussion of the internals of the in-server implementation of full-text indexes in SQL Server 2008. We’ll cover how to architect tables that use FTS for best performance. Finally we’ll cover the new parsing and other DMVs that make FTS less of a “black-box” and assist troubleshooting in SQL Server 2008. Topics covered include:

Service Broker uses an array of new database objects, such as services, queues, contracts, message types, and priorities and server-level objects such as endpoints. It also can use a set of Windows or certificate-based security features. As such, a Service Broker application can be difficult to set up as well as to monitor, diagnose, and troubleshoot. In this module, we’ll cover all of the objects and illustrate the object and security setup, as well as how to use SQL Profiler and the SSBDiagnose utility to validate your setup and diagnose conversation-specific runtime problems. Topics covered include:

SQL Server 2008 introduced two new mechanisms for tracking changes. This module covers both mechanisms, change data capture and change tracking, and explains the reason and use cases for each feature. In addition, we’ll cover setting up and troubleshooting each feature, as well techniques for monitoring a running system. We’ll accomplish this by examining the internals of how each feature works. Topics covered include:

In this module, we’ll cover client setup, including choosing protocols and endpoint definition, login and session encryption, as well as other client setup considerations. We’ll go into troubleshooting client problems using the SQL Server client stack’s built-in diagnostics and show how to use these in conjunction with Extended Events. A client application coded without regard for performance and data types can slow down even the best tuned and managed SQL Server database, so this module cover some common mistakes made when mapping SQL Server types to client data types. Topics covered include:

In this module, we’ll cover dealing with ORMs (Object-Relational Mapping layers) as a DBA. A client application coded without regard for performance can slow down even the best tuned and managed SQL Server database, so this module covers best practices for client coding. There is advice and support that a DBA can give that helps an ORM make best use of the database. Topics covered include:

SQL Azure is Microsoft’s newest offering in the SQL Server space. Administration, operations, and internals tuning is accomplished by federated servers in worldwide IT centers. Deployment and programmability and integration are the main challenges in this cloud-based system. Topics covered include: