As the upcoming Intel Cascade Lake-SP server processors are getting closer to their official release date (which my sources tell me is April 2, 2019), some more specifications are starting to leak out.

Not directly from Intel, but from their system integrator partners, in this case HP, which leaked some Cascade Lake-SP SKUs and their detailed specifications. This was in some online documentation about the HP Z6 G4 Workstation, which was posted on February 22, 2019. HP quickly removed this information, but the information is out there now.

The leaked Cascade Lake-SP SKUs and their relevant specifications are shown for the most interesting SQL Server choices (at each core count) on the right side of Figure 1. This is important information if you are planning a SQL Server upgrade in the coming months! 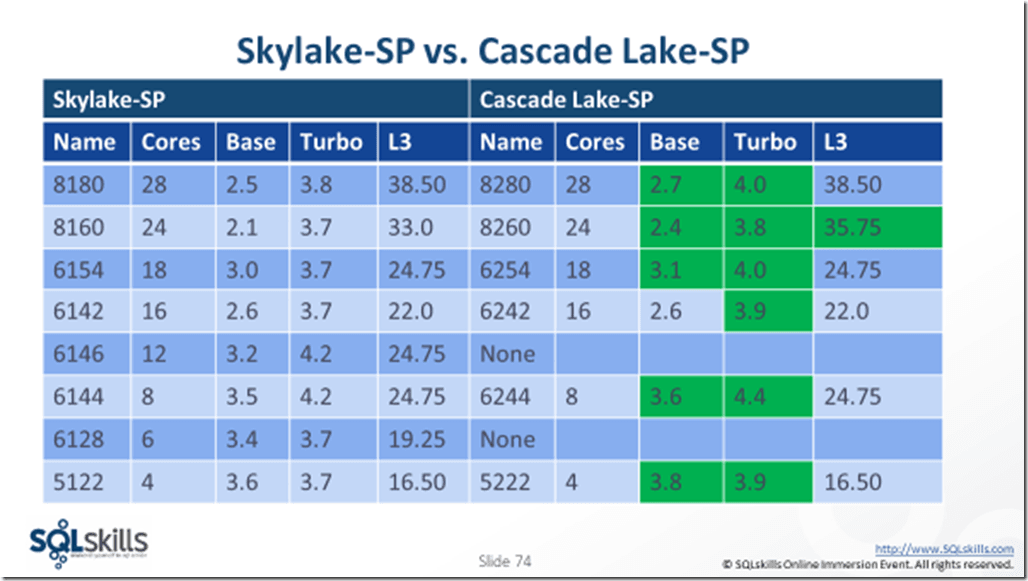 To be sure, Cascade Lake-SP does have at least two useful new features compared to Skylake-SP. The first is hardware-level protection from many Spectre/Meltdown vulnerabilities. These will perform better than existing software or firmware-level fixes. The second is support for Intel Optane DC Persistent Memory (Apache Pass). This may be useful for some SQL Server workloads.

So far, there seem to be some gaps in the Cascade Lake-SP SKU lineup, with no direct replacement for the Gold 6128 or Gold 6146. I have been told that Cascade Lake-SP will be a phased rollout from Intel, with not all SKUs being immediately announced.

ServeTheHome captured a .PDF version of the leaked page before HP took it down.

Intel is being less than forthcoming about the available Cascade Lake-SP SKUs and their detailed specifications. This makes it more difficult for you to do informed planning about your exact Cascade Lake-SP CPU choices, and to decide whether you should wait for Cascade Lake-SP to be available or not. Another factor is the upcoming release of the 7nm AMD EPYC “Rome” processors.

Intel is probably very concerned about AMD’s upcoming product release (as well they should be), which gives them even more incentive to be as secretive as possible about the details of Cascade Lake-SP. If you are planning a SQL Server upgrade in 2019, I can help you understand how to use this information to make an informed decision.

What do you think about this? Are you willing to wait for Cascade Lake-SP? Please let me know in the comments.

The first public PCIe 4.0 NVMe SSD was demoed by Phison at CES. It was a Phison PS5016-E16. This SSD did 4069MB/sec for sequential reads and 4268MB/sec for sequential writes on CrystalDiskMark. Phison claims that the released version will have speeds up to 4.8/4.4 GB/s of read/write sequential throughput. This card is due to go on sale in Q3 of 2019.

ServeTheHome has a thoughtful article looking at the market share gains in the server space by the current generation AMD EPYC “Naples” processor. This processor was first released in mid-2017. AMD has gone from 0.8% in Q4 of 2017 to 3.2% in Q4 of 2018. That is still a small number, but I believe that market share will start to increase at a much faster rate during 2019 and 2020.

RedGamingTech reports that the upcoming 7nm AMD Ryzen 3000 “Matisse” mainstream desktop processors (and a new, optional X570 chipset) are going to be released by AMD on July 7, 2019. This will happen during Computex 2019. The expectation is that these AMD processors will initially have twelve physical cores. There will be a 16-core SKU being released later in the year.  This SKU will counter the expected release of the 10nm 10-core Intel Comet Lake desktop processors.

It is possible that AMD will then have both a single-threaded CPU performance and a core count advantage. These processors will also sell at a lower price than the competing Intel mainstream desktop parts. This situation will probably true for at least nine-twelve months. This is not good news for Intel, and it will be interesting to see how they respond to this challenge.

Data Platform MVP Ola Hallengren has created and maintained his free SQL Server Maintenance Solution script for over eleven years now. His script creates some objects in your master system database (by default). It also creates and enables twelve SQL Server Agent jobs.  These jobs do things like database backups, index maintenance, and database integrity checks. It is a great solution that many SQLskills.com clients use. In order to have the jobs run, you will need to create SQL Server Agent job schedules for each one.

An enabled SQL Server Agent job that does not have a schedule associated with it will never automatically run. I frequently help clients setup and configure the Ola Hallengren SQL Server Maintenance Solution. After many years, I finally got tired of manually creating a job schedule for each of the SQL Server Agent jobs. I decided to create a T-SQL script that you can run to create a schedule for each of the twelve jobs, which you can get here.

You can (and probably should) modify the schedules in my script to suit your business requirements and infrastructure. For example, depending on your Recovery Point Objective (RPO) SLA, you would probably want to change how often you run transaction log backups. Another example is deciding when to run resource intensive jobs.  These would the “DatabaseIntegrityCheck – USER_DATABASES” job or the “IndexOptimize – USER_DATABASES” job.

If you have you have shared storage, you would want to be more careful about your job scheduling. In that case, you will want to ensure that every instance is not doing resource intensive jobs at the same time. Please let me know what you think of this script and if you have any suggestions for improvements. Thanks!