I recently had a chance to work on someone’s new Dell Inspiron 5480 laptop recently, doing some memory and storage upgrades. I also installed and patched a fresh copy of Windows 10 Professional, updated the main BIOS, updated the drive firmware, and also installed all of the latest device drivers. This was purposely meant to be a rather modest and affordable system that would still be a decent performer in a relatively small and light form factor.

These general specifications are a pretty big improvement over a mainstream business laptop from a few years ago. It used to be that machines in this price range would have a 2C/4T processor and a single 2.5” SATA drive bay, probably with a conventional hard drive. Having a 4C/8T processor and two drive bays, one being M.2 PCIe 3.0 x4 NVMe, makes a big difference!

I wanted to confirm that the machine wasn’t DOA from Dell, so I unboxed it and plugged it in. Everything worked fine out of the box, so I collected some quick CrystalDiskMark results on the two OEM drives. First was the 128GB SK Hynix M.2 PCIe NVMe boot drive. As you can see below, this is quite miserable performance for an M.2 PCIe NVMe SSD.

Keep in mind that this is a M.2 2230 form factor drive that also only supports two PCIe 3.0 lanes, rather than the four PCIe 3.0 lanes that most M.2 PCIe NVMe drives support. This limits its sequential bandwidth to about 1600 MB/second. It is also a very small capacity drive, which further limits its performance because there are fewer NAND cells than in a larger capacity drive. You really should try to stay away from NAND SSDs that are smaller than 500 GB in size.

Just for comparison, here are the same CrystalDiskMark results for the 1TB Seagate ST1000LM035-1RK172 5400 rpm SATA hard drive that came in the system. Even with a 128 MB cache, these are not impressive results for a laptop hard drive. They are probably better than than the hard drives in many existing laptops, but really, using a conventional magnetic hard drive in a laptop is just a miserable experience that I would avoid unless you have no financial alternative.

Opening Up the Beast

Once I was done with this initial storage testing, it was time to open up the machine to make some improvements. Working with laptops for hardware modifications can be anywhere from easy to fairly difficult. Some “Ultrabook” style machines are virtually impossible to work on, with non-replaceable components or components that are soldered in place. Just getting them opened without breaking or damaging anything can sometimes be pretty challenging. I recommend that you download the service manual for your machine before you even buy it to make sure you understand what you will be dealing with. I also recommend having proper tools from IFixit.com.

I would rate the difficulty of opening up the Dell Inspiron 5480 as medium. There are three captive phillips screws, and seven removeable phillips screws that must be loosened or removed from the base. After that comes the fun part of getting the plastic base to pop off without breaking anything or damaging the plastic surface. IFixit has a number of “prying and opening tools” that are made of carbon fiber or plastic, so you can open things like this without damaging them. 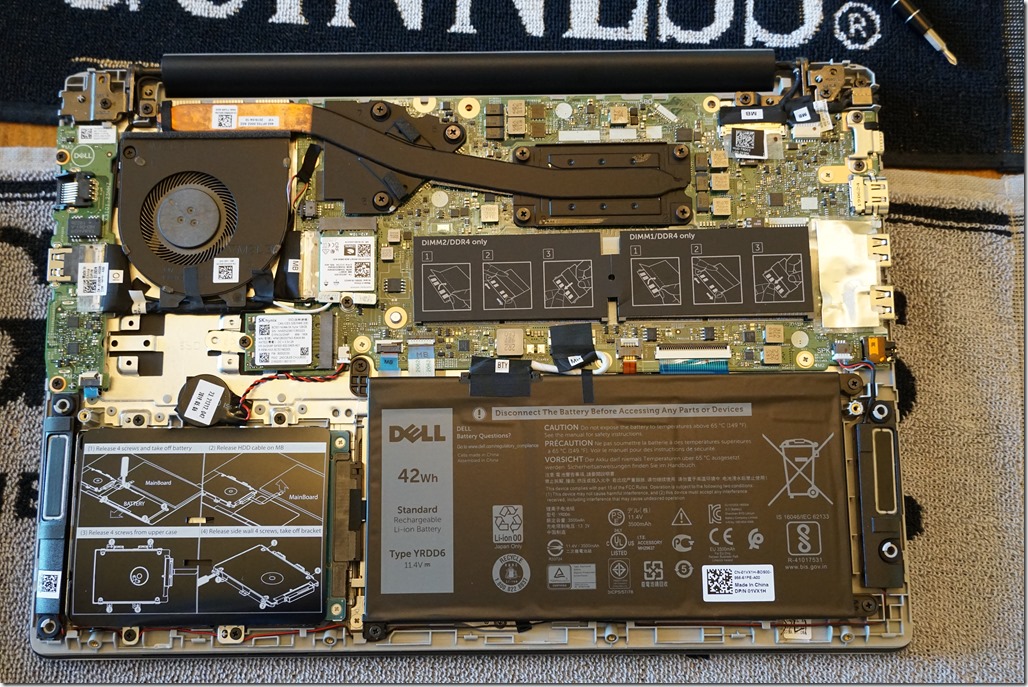 Figure 1: Inside of Dell Inspiron 5480 with OEM Drives 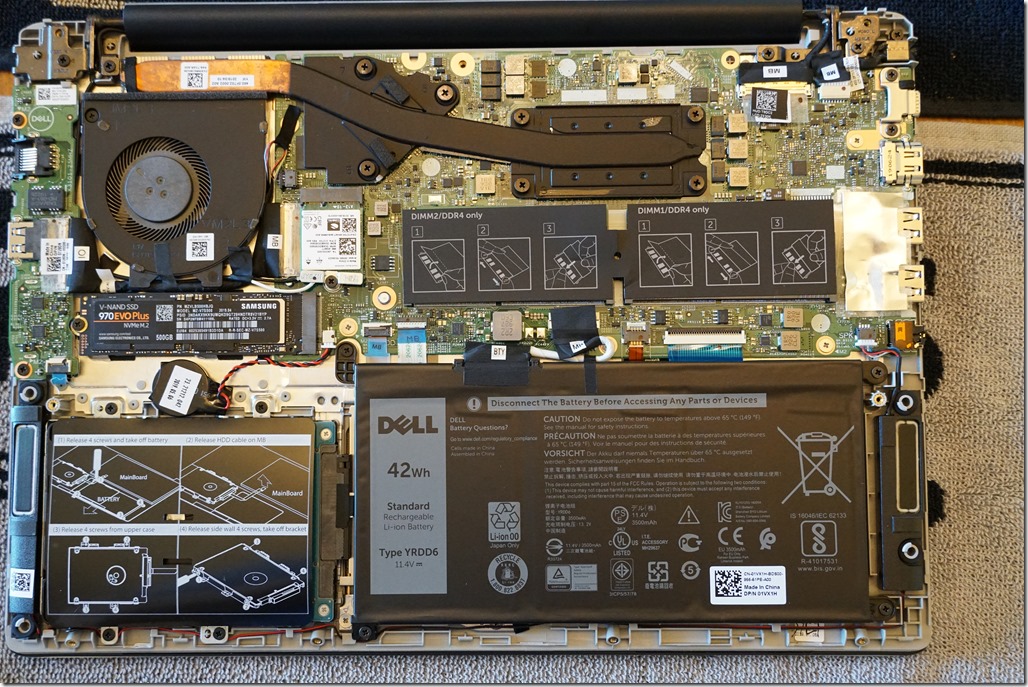 After opening up the case, I added a 16GB DDR4-2666 SODIMM that I had purchased for $64.99 at Micro Center. Next, I removed both OEM drives, and I installed the 500GB Samsung 970 EVO Plus M.2 2280 PCIe NVMe drive. I had to move a small retaining clip to a different position because the new drive used the longer 2280 form factor (which means it is 80mm long rather than 30mm long). I purposely did not install the 1TB Samsung 860 EVO SATA SSD at this time, because I was going to be installing a fresh copy of Windows 10. In my experience, Windows 10 will sometimes (without asking) install some things on a second drive if it is present during the initial installation, so I always have just a single physical or logical drive present at this point. 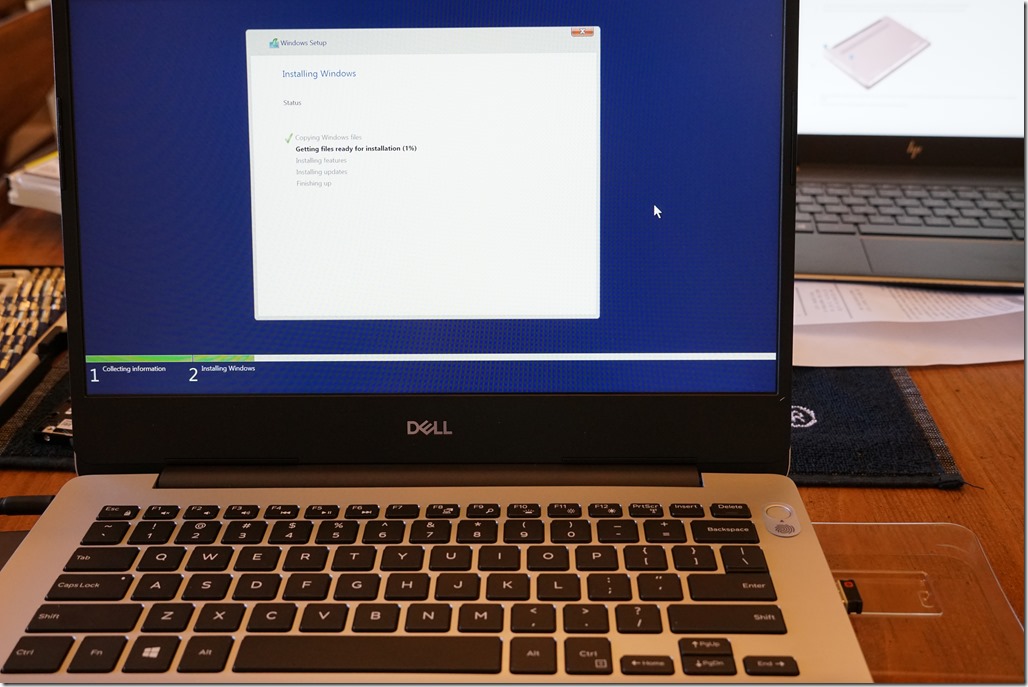 As it turned out, I ended up having to install Windows 10 twice because of how Dell had the storage BIOS settings configured from the factory. They had the storage in RAID mode (which uses Intel storage drivers), which seemed to work and perform decently. The only problem with that was that this confused the Samsung Magician software, which claimed that the Samsung 970 EVO Plus was not supported (which prevented me from using Samsung Magician to check for and install firmware updates on the drive). Switching the BIOS to AHCI mode made Windows 10 refuse to boot, so I just reinstalled it from scratch rather than try to fix it. After getting Windows 10 Professional installed, patched, and upgraded to Version 1903, I was ready to continue.

Once everything was installed, patched, and updated, I ran a fresh set of CrystalDiskMark tests on both new drives. First was the new boot drive, which is the 500GB Samsung 970 EVO Plus. As you can see, this was a huge improvement over the original 128GB SK Hynix drive, especially for write performance!

Next was the 1TB Samsung 860 EVO SATA SSD that replaced the 1TB Seagate 5400 rpm hard drive. Again, this was a huge improvement over the OEM hard drive. It also shows how much better a good M.2 PCIe NVMe SSD is compared to a SATA AHCI SSD.

For less than $1200.00 (including the upgraded memory and storage), my friend has a pretty capable machine. It has good CPU performance with a relatively modern Intel 4C/8T processor, 32GB of RAM, and 1.5TB of flash storage. It could easily be upgraded to 64GB of RAM, and up to 6TB of flash storage in the future. It also has a modern 802.11ac WiFi radio and a decent amount of USB 3.0 ports and other connectors. This is not a “top of the line machine”, but it will give a good enough user experience for several years.

Posted in: Dell, Hardware
Be the first to Reply!

For a Dell PowerEdge R920, I would be looking at one of these three processors:

These three candidate processors all have higher base clock speeds and lower physical core counts than some other more common choices, such as the fifteen-core Xeon E7-4890 v2.

The closest equivalent AMD-based system I could find in the TPC-E benchmark results (to the legacy system) was an HP ProLiant BL685c G7 Blade Server with four, 2.2GHz AMD Opteron 6174 processors and 512GB of RAM, with an actual raw TPC-E score of 1464.12. The raw TPC-E score is a good way of measuring the overall CPU capacity of a system.

Dividing this score by the number of physical cores in the system gives us a score/core of 30.5, which is a good measure of single-threaded processor performance. Since the legacy system has slower 1.9GHz AMD Opteron 6168 processors (from the same generation and family), we simply need to adjust for the clock speed difference. Taking 1.9GHz divided by 2.2 GHz is 0.8636. Taking the actual 1464.12 score times 0.8636 gives us an estimated TPC-E score of 1264.46 for the legacy system. Dividing that by 48 physical cores gives an estimated score/core of 26.34 for the legacy system.

We can adjust this actual result for the three candidate processors listed above to take into account the difference in core counts and base clock speeds to get estimated TPC-E scores for a four-socket system with each of those processors since they are from the same generation and family.

Comparing the legacy system to the actual new four-socket TPC-E result and my estimates for the other three processors, gives us this summary:

This means that we could choose from having from roughly four times better single-threaded processor performance using the Xeon E7-8893 v2 processor or from having roughly four times more processor capacity using the Xeon E7-8857 v2 processor in a new system compared to the legacy system, depending on which processor we choose. The difference in SQL Server 2014 Enterprise Edition license costs between the different processor choices is quite dramatic. For example, going from the twelve-core processor to the faster ten-core processor lowers your SQL Server license costs by about as much as the actual server would cost.

For quite some time, I have been talking about how current Intel-based four-socket database servers have had significantly lower single-threaded processor performance than current Intel-based two-socket database servers. This is because the first generation Intel Xeon E7 processors were using the relatively old 32nm Westmere microarchitecture that was introduced in early 2011 for the initial Xeon E7 (Westmere-EX) product line.

These E7 processors also use much lower base and turbo clock speeds than current Xeon E5 v2 processors, which also hurts their single-threaded processor performance. They do have higher overall concurrent load capacity due to higher total memory capacity and more total processor cores, but the individual processor cores in most four-socket servers have been much slower than what you find in a modern two-socket server. Simply put, bigger servers are not faster servers. It is like comparing an eighteen wheeler truck to a Tesla Model S.

Now, that old assessment is going to change somewhat, with the release of the 22nm Intel Xeon E7 Processor v2 Family (Ivy Bridge-EX), and new model servers from the major server vendors that have even higher memory capacity, PCI-E 3.0 support, and 12Gbps SAS/SATA support, along with much faster RAID controllers. These processors are a substantial improvement over the previous generation 32nm Intel Xeon E7 processors (Westmere-EX) that have been available since early 2011.

A more pessimistic view is that your SQL Server 2012/2014 license costs could rise by 50% as you move from an existing server equipped with four, ten-core Xeon E7-4870 processors (with a total of forty physical cores) to a new server with four, fifteen-core Xeon E7-4890 v2 processors (with a total of of sixty physical cores). For reasons known only to Intel, the lower core count SKUs in the Xeon E7-48xx v2 product family are not “frequency optimized”, meaning they do not have higher clock speeds than the high-end, E7-4890 v2 processor. The base and turbo clock speeds of the best lower core-count SKUs in the E7- 48xx v2 family actually drop off pretty quickly as the core counts go down. The shared-L3 cache sizes also drop off very quickly, as does the processor price, as you can see in Table 1.

Either of those choices would be better than one of the lower core count processors in the E7-48xx v2 product family, at least from a pure processor performance perspective.

Intel also has refreshed the E7-88xx v2 product family that is meant for eight-socket and larger servers. For some reason (probably for HPC use), Intel does have “frequency-optimized”, lower core-count models in this product family, as you can see in Table 2.

I could see some scenarios where you might want to get an eight-socket server with the six-core E7-8893 v2, so that you could have the same physical core count, while having double the memory capacity and much better single-threaded processor performance than a four-socket server with the twelve-core E7-4860 v2. The hardware cost would be significantly higher, since you would be buying eight processors for $6,841.00 each instead of four processors at $3,838.00 each, but for many organizations, that would not be a major issue.

Some server vendors may offer the Xeon E7-88xx v2 processors in their four-socket server models, since they are pin-compatible, which would give us a lot more flexibility as far as processor selection goes. I really wish Intel had “frequency-optimized” models in their Xeon E7-48xx v2 product family, to make this even easier.