As we move towards the end of 2013, 4th generation Intel Core processors are becoming more readily available in new machines at a wider range of price points. Since I know a few people are looking for a new laptop this time of year, I thought I would pass along one pretty affordable possibility that is available this week in the United States.

Best Buy (which actually has been improving the quality of their computer offerings somewhat over the past year) is selling a Toshiba Satellite P55-A5312 for $529.99 (rather than the regular price of $629.99).

This particular 15.6” model comes with an Intel Haswell Core i5-4200U processor, 6GB of RAM (in two easily accessible memory slots), a 750GB 5400rpm drive and a 1080p, non-touch screen. You can bump the RAM up to 16GB with two 8GB sticks, and with a little more work (removing about twelve screws that are hidden behind rubber covers) you can replace the hard drive with a SATA III SSD of your choosing. If you want to go more hard-core, you can remove the optical drive and put a second SATA III SSD in its place.

Here is an example of a 1.35V 16GB memory kit that uses the slightly higher speed 1866MHz memory:

Here is an example of a 1TB SATA III SSD:

The Core i5-4200U processor in this machine is the exact same processor that is in the new Microsoft Surface 2 Pro and many mid-range Ultrabooks. It is a dual-core with hyperthreading, and its base clock speed is 1.6GHz, with a Turbo speed of 2.6GHz. It also supports VT-x for better virtualization performance.  Having 1920 x 1080 screen resolution (even in a cheaper TN panel) is unusual at this price point. Having 16GB of RAM and one or possibly two, fast SSDs would let you run multiple  simultaneous VMs pretty easily. The spec sheet says it weighs 5.3lbs, but several people on the Toshiba forums claim it actually weighs about 4.9lbs. It feels lighter than 5.3lbs to me, and it is pretty thin. The battery life should be about 6 hours after you replace the HDD with an SSD (especially one that supports the DevSleep mode).

Depending on your SSD choice, you could come in at under $1000.00 for a pretty competent machine. This is a decent alternative that you might want to consider. With 16GB of RAM and a decent SSD, it would have plenty of horsepower to run some virtual machines and to do some SQL Server development work.

The 22nm 4th generation Intel Core desktop processors (aka Haswell) have been available for sale for a couple of months now, so I have had some requests to put together a suggested component list for a desktop system that would be suitable for SQL Server 2012 development and testing usage. As you may know, the desktop Haswell processors use Socket 1150, which is incompatible with the older Socket 1155 that was used in the previous desktop 32nm Sandy Bridge and 22nm Ivy Bridge processors.

That means you will have to get a new motherboard to use a Haswell processor. You should get a Z87 chipset motherboard so that you can get a nice feature set with the motherboard. You want to make sure you get a motherboard that has four memory slots, instead of two, so you can have 32GB of RAM. You also want to pay attention to how many total SATA III ports you are getting. The Z87 chipset natively supports six SATA III ports (with hardware RAID support), and many motherboards will have an extra Marvell controller that can support either two or four more SATA III ports (with hardware RAID support). Having SATA III support is vital for modern SATA III solid state drives.

This system will have an Intel Core i7-4770K quad-core  processor (plus hyper-threading), and 16GB of RAM (which can be expanded to 32GB of RAM for about $129.00 more). You could also back down to an Intel Core i5-4670K processor, which is a quad-core without hyper-threading. The Core i5 has a slightly lower base and Turbo clock speed and a smaller 6MB L3 cache compared to the Core i7, but it is $80.00 less at Micro Center. Both of these processors have Intel HD Graphics 4600 integrated graphics, which save you the cost and extra power usage of getting a discrete video card. You would probably have to spend about $100.00 to get a discrete video card that has better performance than the Intel HD Graphics 4600 integrated graphics, and I just don’t think you will need to do that for normal desktop usage.

This system will have better CPU and memory performance than many older production database servers (although you are limited to 32GB of RAM). Depending on what you want to do with this system, you may need or want to add additional SATA III SSDs or conventional hard drives. If you skip the optical drive, you can add seven more drives to this system before you run out of drive bays and SATA III ports. With enough fast SSDs, you may have better I/O performance (under a light load) than many production database servers. On the other hand, you won’t have redundant components (such as dual power supplies) like you would have with a rack-mounted database server. You will also have SATA consumer-level SSDs that cannot handle a heavy server workload with consistent performance as well as expensive enterprise-level SAS SSDs.

Below, I have links to the manufacturer information about each component, along with links to the components at Micro Center and NewEgg.

This is the “top of the line” Haswell desktop processor, with an unlocked multiplier. It is also the main Core i7 processor that Micro Center carries and is eligible for their $40.00 motherboard/processor bundle discount. It does support VT-x with Extended Page Tables for hardware virtualization support, but it does not support VT-d for directed IO with virtualization. If you are really concerned about VT-d, you can always get an Intel Core i7-3770 (that does have VT-d) from NewEgg or Micro Center. It will cost $309.99 at New Egg or $249.99 at Micro Center, and you would not get the motherboard bundle discount from Micro Center. I would say that with a decent number of good SSDs, you are much less likely to have any I/O bottlenecks with virtualization.

These Fractal Design cases get universally excellent reviews, and they are very easy to work on when you are building the system, with excellent cable management features. They are also very quiet, with sound deadening foam inside. This case has eight 2.5”/3.5” drive bays and two USB 3.0 ports on the top front of the case. It does not have any silly gaming features.

This is pretty decent memory that is eligible for the $10.00 bundle discount from Micro Center when you buy it with a motherboard. NewEgg’s price is actually a little cheaper on this one item. You could also spend more money on higher speed memory, which you may or may notice that much benefit from in real life.

These are one of the top consumer SSDs available right now, with lots of good reviews. I have bought a number of these and they are very fast. They are also eligible for a $20.00 bundle discount from Micro Center when you buy them with a motherboard or processor.

I still like to have an optical drive, even though I rarely use it. If you have an external USB optical drive, you can use that to install the OS, or you could use a thumb drive.

As you can see below, if you are lucky enough to live near a Micro Center, you can save a significant amount of money by getting all of these components from Micro Center instead of NewEgg. You will have to pay sales tax at Micro Center, while you probably won’t at NewEgg. Most of the components (except the case) have free shipping from NewEgg.

I’ll also have a post up in the near future that talks about how to build an Intel Sandy Bridge-E or Intel Ivy Bridge-E system, that can have six-cores (plus hyper-threading) and 64GB of RAM. One of those systems will be considerably more expensive, due to a more expensive motherboard, more expensive processor, and more RAM.

Last Sunday, I was in line at 11AM at the Denver Micro Center (along with a number of other computer geeks) to buy the parts for a new Intel 4th generation Core (aka Haswell) desktop system. This system was destined for my fiancé, Veronica Thomas, as a replacement for a system I built for her back in January of 2011.

Since most of her computer time is spent on Facebook and Gmail, I figured that a Haswell Core i5 processor would be more than sufficient. I also wanted the system to use the the least amount of electricity possible and to be as quiet as possible (without going to any extreme measures). Here are the exact components that I selected:

The Fractal Design Define R4 case is very easy to work with, with lots of room and openings to route the cables in a separate compartment under the motherboard. It also has sound deadening material lining the inside of the case. It also has eight 3.5/2.5 internal drive bays with drive carriers that easily accommodate 2.5” SSDs, with screw holes in the right positions.

The Gigabyte GA-Z87-D3HP motherboard is a mid-range Z87 motherboard that has six SATA III ports and four memory slots, along with lots of USB 3.0 ports. I did not see any reason to get a high-end gaming-oriented motherboard. I did enable Extreme Memory Profile (XMP) in the BIOS for a mild overclock.

The 22nm, 3.4GHz Intel Core i5-4670K is the top-of-the-line, unlocked Core i5 desktop processor that has the improved HD4600 integrated graphics, which are more than capable of handling normal desktop and non-extreme gaming usage. Using the integrated graphics would save money and electrical usage compared to discrete graphics. I decided to just use the included, stock air cooler for now. Since it is a K-series, unlocked processor, it does not have VT-d virtualization support for directed I/O, but that was not a factor for this system. You can see the CPU tab from CPU-Z in Figure 1. 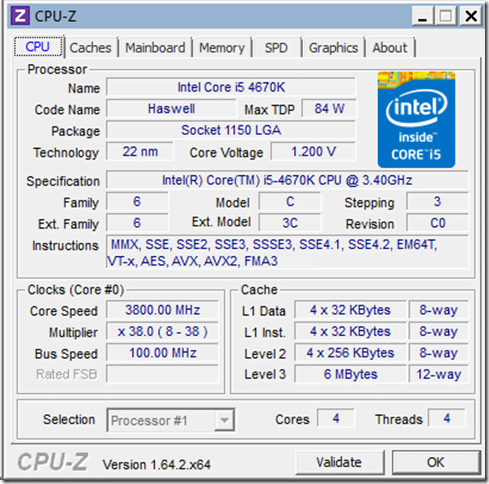 The 256GB Samsung 840 Pro SSD is still one of the best desktop SSDs available right now, and there was an $20.00 discount if I bought it along with a processor or motherboard. It is actually available for $10.00 less on Amazon right now, but I did not want to wait…  You should make sure to download the Samsung Magician software, so you can easily download and install the latest firmware and optimize your OS for an SSD. This is more important with Windows 7 than for Windows 8. Figure 2 shows the CrystalDiskMark results for the Samsung 840 Pro SSD. 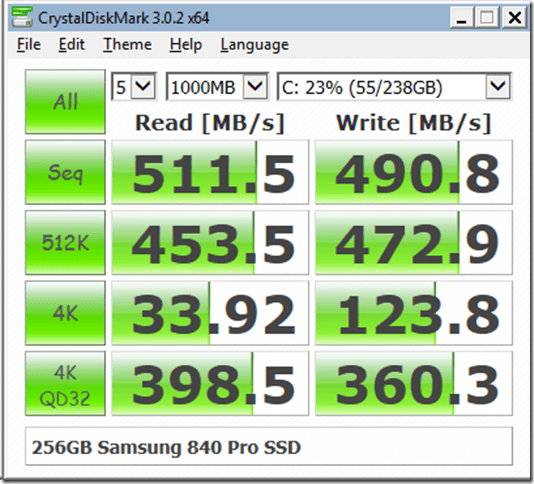 As you can see in Figure 3, this relatively modest system has a Windows Experience Index (WEI) score of 6.7, with the lowest scores being for the integrated graphics. A 6.7 score is not bad at all, and the other scores are 7.7-7.9. Not too bad for a system that cost slightly over $800.00 and only draws 25 watts at idle. 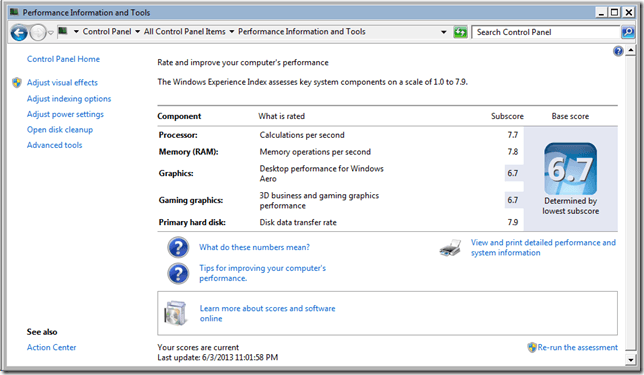 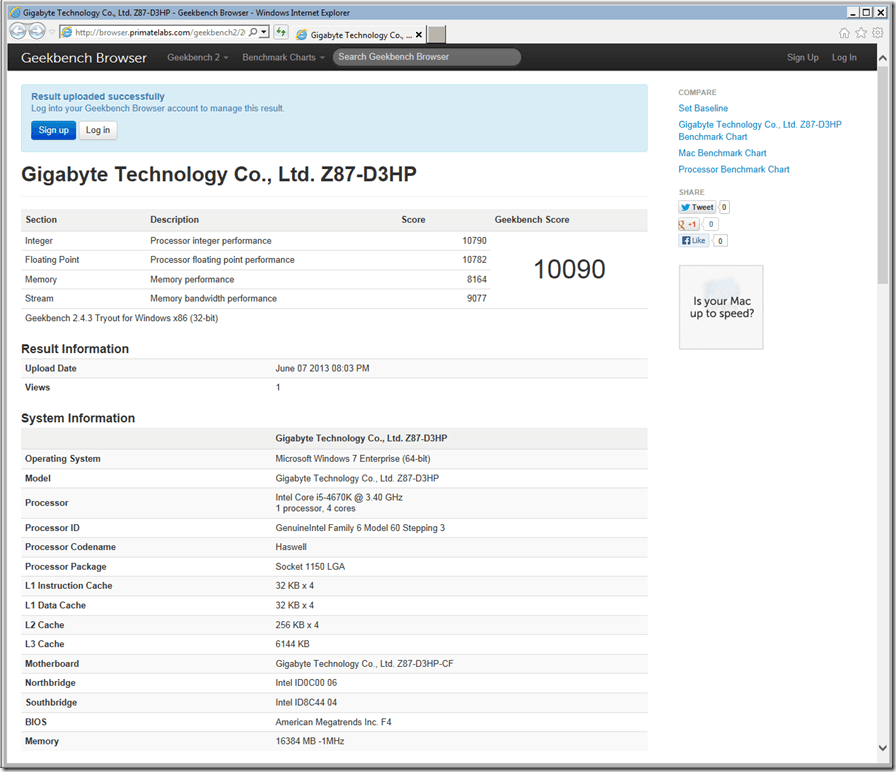