The available links that document this are listed below:

Finally, if you are getting ready to deploy a new instance of SQL Server 2005, then I feel a little sorry for you! SQL Server 2005 is out of extended support, and it is missing so many useful features that were added in newer versions of SQL Server.

Actually, I recently helped a client deploy some new instances of SQL Server 2005 for some pretty valid business reasons. We ended up deploying to a VM (on new, very fast host hardware) that was running Windows Server 2008 R2, which worked perfectly fine.

I recently had an interesting issue with a new SQL Server 2014 Enterprise Edition instance that was going to be hosting about 200 user databases that each use the SQL Server Filetable feature. The reported problem was that this new instance was taking two-three times longer to restore each full database backup than the restores were taking on a different instance (that had similar hardware and storage resources).

I had several initial ideas about what the problem might be, including:

After my initial ideas were found to be incorrect, I tried restoring a full backup of one of the user databases to the new database server, making sure to use the Stats = 1 option, so the restore progress statistics would update every 1%. This gives you more immediate and fine-grained feedback about the progress of the restore, which is always a good idea.

The solution to this issue was simply changing the exclusion rules for the Microsoft Antimalware Service to not scan the files in the filetable directories. This one change decreased the database restore time by 56%.

Here is the restore command and the results of the test.

One thing you might notice is that the filetable directory is on the same LUN as the PRIMARY data file for this database, which is not really the best location. Ideally this directory would be on a separate LUN from any other SQL Server database files, but this may not always be possible due to economic resource constraints.

Here is some more information about filestream performance:

For Day 16 of this series, I am going to talk about a few useful tools you can use to identify some hardware details about a database server. These tools all require that you have access to login to that server, which might be a problem for some people, depending on the policies of their organization. If you are barred from directly accessing your server, my Day 15 post from this series gives you another option to get some information from T-SQL.

The first tool is msinfo32.exe, which is built into all recent versions of Windows. You can simply type msinfo32 in a Run window, and you will see the System Information dialog shown in Figure 1.

The System Information dialog shows that we have a Dell PowerEdge R720. This dialog also shows that I have two Intel Xeon E5-2670 processors, with 64GB of RAM, running Windows Server 2012 Datacenter Edition.

The second tool is the Computer Properties dialog shown in Figure 2. You can get there by bringing up the Windows Charm with Windows + C, then typing Computer then choosing Computer, right-clicking, and choosing Properties. This shows the version and edition of Windows, the computer name, the processor model, and the amount of installed RAM.

The third tool is Windows Task Manager, which is shown in Figure 3. You can get there by right-clicking on the Task Bar, and choosing Start Task Manager. The Performance tab now has different pages for CPU, Memory, and some other items, depending on your hardware.

The CPU page tells you how many logical processors are visible to Windows (the number of sections you see in CPU Usage History) if you right-click and change the display to show logical processors. You can also see overall CPU usage  and CPU usage by NUMA node by selecting the appropriate display type. What is even more useful in Windows Server 2012 is the fact that you see the processor model number and base clock speed, along with the total number of sockets, physical cores, and logical processors. You can also see whether hardware virtualization is enabled, and the cumulative size of your L1, L2, and L3 caches across all of your processors. 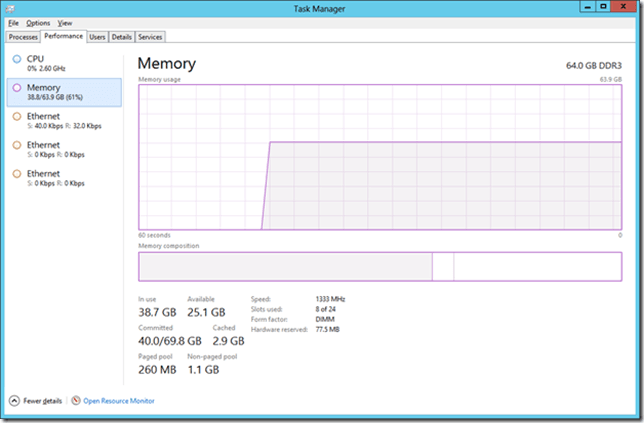 Posted in: Hardware, Microsoft, Windows Server 2012
Be the first to Reply!
← Older posts