This is part three of my three-part series of posts about what I recommend on a visit to Scotland. I'm writing posts because I get asked a lot and this is easier than repeating myself a bunch of times.

There are a lot of cool places to see in Scotland but I don't have time to write a travel book or extensive posts about all of them (except the two previous ones). In this post I'm going to list some of my favorite driving routes that allow you to see a bunch of cool scenery and/or places along with a few pointers to specific items. I recommend getting the Ordinance Survey Landranger series of maps that cover the routes you're going to drive as they list all kinds of interesting historical things to see. For all of these I also recommend doing more research of the routes and places to stop, depending on what you like to do. Many of the places listed here have whisky distilleries nearby or clan centers. I've put in wikipedia links (if existing) the first time a place is mentioned.

There's easily several week's worth of things to do here and the driving can be done in small chunks as the country isn't really big. You can get from Glasgow or Edinburgh to Kyle of Lochalsh in about 6 hours on a good day.

There are many, many more places to see – I didn't even touch on areas south of Glasgow and Edinburgh, The Trossachs, or in eastern Scotland – but I ran out of time – the series took me about 6 hours altogether.

I hope you've enjoyed my series of blog posts and they prove useful to some of you!

This is part two of my three-part series of posts about what I recommend on a visit to Scotland. I'm writing posts because I get asked a lot and this is easier than repeating myself a bunch of times.

Some of the coolest places to visit in Scotland are the various islands. I haven't been to the Orkney, Shetland, or the Outer Hebrides (Lewis, Harris, etc) but I have spent several months of my life over the last 20 years exploring Skye (and I'm taking Kimberly and our girls there in July).

(Image borrowed from Lonely Planet – see here for their Isle of Skye guide.)

The Gaelic name for Skye is Eailean a' Cheo, which stands for Island of Clouds. It's a gorgeous place with high, jagged mountains (the Cuillin), fabulous sandy beaches, and breathtaking views. But it can also be very wet and windy, especially on the western side of the island that looks out over The Minch – the stormy body of water between Skye and the mainland and the Outer Hebrides. Winds up to 80mph have been recorded with average rainfall on the island of 60-80 inches. Best time for good weather is May.

When I first started going to Skye, you could only get to it by ferry, with the main ferry operated by Caledonian Macbrayne and taking a couple of minutes to go from Kyle of Lochalsh (on the mainland) to Kyleakin (on Skye). Now it's been replaced with an ugly bridge between the two that was the cause of much protest when it was built in the 1990s. 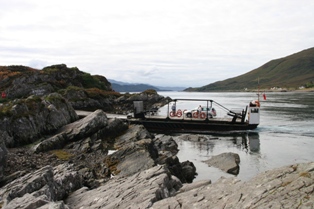 It's called the Glenelg ferry. This is a 6-car ferry and is the only surviving turntable ferry in Scotland. It's a far more romantic way to get to Skye than going over the bridge. The narrow waterway that the ferry crosses has one of the strongest tidal rushes in the UK – more than 12 knots during a Spring tide.

When you get to the other side, take the first right into a little car park. It's the car park for the short walk to the sea otter viewing hide – I've seen them before!

You'll notice that most of the roads apart from the main A87 up to the Outer Hebrides ferries at Uig, parts of the Portree to Staffin road, and parts of the Sligachan to Dunvegan road, are single track roads. They're excellent fun to drive in something like a Landrover and I advise renting an SUV of some kind. I get mine from Aberdeen 4×4 – they'll deliver/pick-up anywhere in Scotland and have a good range of quality cars/SUVs at decent prices.

Rather than write an essay on all the places to see in Skye, here's a bullet list with Wikipedia and other links for places I think are worth visiting. The drives to all these places are worthwhile and I'd recommend driving to the end of every road on the island to see all kinds of ruined castles, old churchyards, and great views. 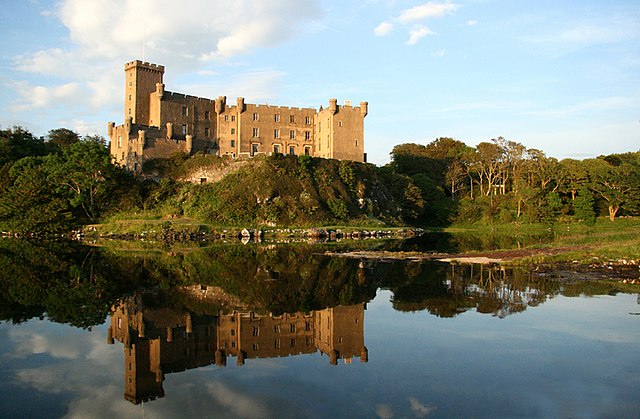 A friend of ours on the SQL Server doc team asked me to recommend some places to visit for their upcoming trip to Scotland so instead of dashing off a long list in email I thought I'd do it as a blog post so others can benefit too.

I'm going to concentrate on the areas I know well, which are the West Coast, Skye, and the North West of Scotland. Links are mostly to Wikipedia. I hope you find it useful – it's a bit of a brain dump of historical places, good scenery, and good drives – and I'm going to do it over multiple posts.

Also check out the photos I posted when I first took Kimberly to Scotland in 2009: Photos and stories from our Scotland trip – spot the photo I took that became my Twitter avatar…

And check out Kimberly's post about that trip: Scotland is amazingly beautiful but, ah, the weather IS worse than Seattle!


Before planning a trip check out the websites of the National Trust for Scotland and Scottish National Heritage to see what historic properties are near where you're going.

You can get part 2 (about the Isle of Skye) here and part 3 (about driving trips in the west and north west) here.

First off you need to visit Glasgow, Edinburgh, and Stirling. I went to high school (Glasgow Academy) in Glasgow for six years, living 22 miles north in Helensburgh, by the large Royal Navy submarine base at Faslane where my father was based for many years. I went to the University of Edinburgh (majored in Computer Science and Electronics) and lived there for 8 years, and lived close to Stirling for a few years too – so I know all three cities extremely well. I think Edinburgh is definitely my favorite of the three, which is why I have more to recommend there. You can easily spend a week on these three cities alone, or a week just in Edinburgh.

Places to visit: Edinburgh Castle (try to be there at 1pm when they fire the artillery gun), Holyrood Palace, drive through Holyrood Park (for the adventurous, I strongly recommend climbing Arthur's Seat for awesome views over the city and off to the famous Forth Rail Bridge). Try to be there at the time of the Edinburgh Festival in August and take in the Edinburgh Military Tattoo in the grounds of the castle (book in advance – it's sold out completely for every show over the last ten years – I used to have a student apartment one summer in the early '90s where we could see it every night). The Scottish National Gallery has an excellent collection of artwork and the National Museum of Scotland is very cool, including a bunch of the famous Lewis Chessmen. Lots of excellent restaurants – I strongly recommend The Witchery on the Royal Mile. Literally hundreds of excellent pubs – way too many to name – but check out Greyfriar's Bobby, Rose St Brewery, and anything down in the Grassmarket. I've only stayed in one hotel in Edinburgh – The Glass House – very cool boutique hotel. Oh, and also check out St Giles Cathedral on the Royal Mile too (although I'm not religous at all I love ecclesiastical architecture!). Make sure to do one of the cool spooky tours – underground or a ghost tour.

I also recommend taking a drive up the coast of Fife, checking out St Andrews (where my sister lives – awesome old city), Falkland Palace, and Hopetoun House. Check out the movies Restless Natives and Trainspotting (one of my top-5 – beware, not for the faint-hearted, like any of Irving Welsh's awesome books).

It's only an hour by train or road (via the M8) to Glasgow… I used to do it every day during the summer months between university years when I still lived in Edinburgh and worked for British Telecom at their Glasgow software engineering center (they sponsored me through university – thanks BT!).

Glasgow is a very different place from Edinburgh – it will always kind of feel like where I grew up as I went to school here from the ages of 11 to 18 (taking the train every day from home). There's huge rivalry between the two cities as well.

I don't know any of the hotels in Glasgow I'm afraid, but there are loads of good restaurants and pubs. I recommend any of the Sarti restaurants, The Italian Kitchen, the Ashoka in Ashton Lane, and my absolute favorite: The Ubiquitous Chip (also in Ashton Lane). Ashton Lane is in the 'West End', near Byres Road where there are lots of great pubs. It's also near the utterly fabulous Kelvingrove Art Gallery and Museum – a giant museum with incredible exhibits. Easily a day just for that. Also check out the nearby, and equally excellent, Riverside Museum of Transport and Travel. Both of these are near Kelvingrove Park, through which I used to walk to school in my final year of high school. You should also try to make it out to the Burrell Collection, another excellent museum.

Glasgow's a lot more industrial than Edinburgh and has less historical buildings. Kind of in a triangle between the two to the north is Stirling, easily accessible by road or train…

For the last few years when I worked at DEC I lived in a charming, small village in Stirlingshire called Kippen, about forty miles from the DEC offices in Livingston (a 'new town' with nothing really interesting at all, except the original Livingston which is now called Livingston Village). Stirlingshire has excellent rolling countryside and is really at the south end of the highlands of Scotland.

Stirling is a really ancient place, dating from the Stone Age. First off you must visit Stirling Castle, which sits on an imposing 'crag and tail' rock formation just like Edinburgh Castle – that could be a day itself. Also check out the Wallace Monument, which commemorates Sir William Wallace (think Braveheart) and has his sword on display. Again, lots of good restaurants and bars – none that spring to mind as essential visits though. The only hotel I've stayed in nearby is Airth Castle Hotel – try to get a turret room – very cool. Try to walk around the Old Town of Stirling (down from the castle basically) to see lots of other historic buildings.

Nearby is Blair Drummond Safari Park. I'm not a big fan of zoos but if you're traveling with kids then this will earn you points with them. Bridge of Allan is also worth checking out, as is Doune Castle.

End of part one…