SQLskills has an ongoing initiative to blog about basic topics, which we’re calling SQL101. We’re all blogging about things that we often see done incorrectly, technologies used the wrong way, or where there are many misunderstandings that lead to serious problems. If you want to find all of our SQLskills SQL101 blog posts, check out SQLskills.com/help/SQL101.

When I look at many SQL Server instances in the wild, I still see a large percentage of instances that are running extremely old builds of SQL Server for whatever major of version of SQL Server is installed. This is despite years of cajoling and campaigning by myself and many others (such as Aaron Bertrand), and an official guidance change by Microsoft (where they now recommend ongoing, proactive installation of Service Packs and Cumulative Updates as they become available).

Microsoft has a helpful KB article for all versions of SQL Server that explains how to find and download the latest build of SQL Server for each major version:

Where to find information about the latest SQL Server builds

Here is my commentary on where you should try to be for each major recent version of SQL Server:

SQL Server 2017 and newer will use the “Modern Servicing Model”, which does away with Service Packs. Instead, Microsoft will release Cumulative Updates (CU) using a new schedule of one every month for the first year after release, and then one every quarter for next four years after that.

Not only does Microsoft correct product defects in CUs, they also very frequently release new features and other product improvements in CUs. Given that, you should really try to be on the latest CU as soon as you are able to properly test and deploy it.

Reasons to Upgrade to SQL Server 2017

SQL Server 2016 and older use the older “incremental servicing model”, where each new Service Pack is a new baseline (or branch) that has it’s own Cumulative Updates that are released every eight weeks. Microsoft corrects product defects in both Service Packs and in CUs, and they also very frequently release new features and other product improvements in both CUs and Service Packs.

So just to recap, here are my recommendations by major version:

SQL Server 2017: Latest CU as soon as you can test and deploy

SQL Server 2012: SP4 plus the security hotfix for Spectre/Meltdown.

One very useful tool for freeing up disk space is the built-in Disk Cleanup application in Windows. You can start this application by simply typing Disk Cleanup at your Windows Start menu. Once it starts, you will need to pick which drive you want to scan and clean up. In most cases, you will want to choose your boot drive, which will be C: for most people.

You should always click on the “Clean up system files” button to get a complete picture (and find the larger files that you may be able to delete). After clicking on the button, you’ll have to wait for the scan to complete. If you have a magnetic drive, this might take a while, while if you have an Intel Optane 900P drive, it will be extremely quick! 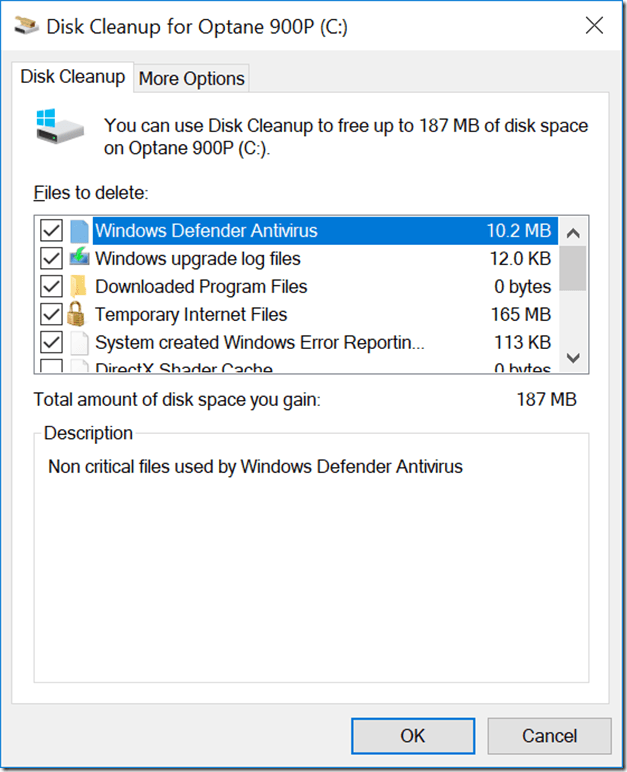 In many cases, you will find an entry for “Previous Windows installation(s)” that may be 25-50GB in size, which is pretty significant when you have a smaller boot drive and are running low on disk space. In Windows 10, you will get those when you install the semi-annual updates such as the recent “Windows 10 April 2018” update.

You just need to be aware that if you let Disk Cleanup delete the previous Windows installations, you won’t be able to go back to a previous version by uninstalling the latest version. The tool will display a special confirmation dialog to make sure you know this.

If you choose to delete everything that the tool offers up, it is not uncommon to get 50-75GB of space back. Again, the disk cleanup process will take quite a while with a magnetic drive.

You can start Disk Cleanup from a command line, as Microsoft explains here.

You can also use the Windows Storage Sense feature to automatically do some of the disk cleanup for on all of your drives. 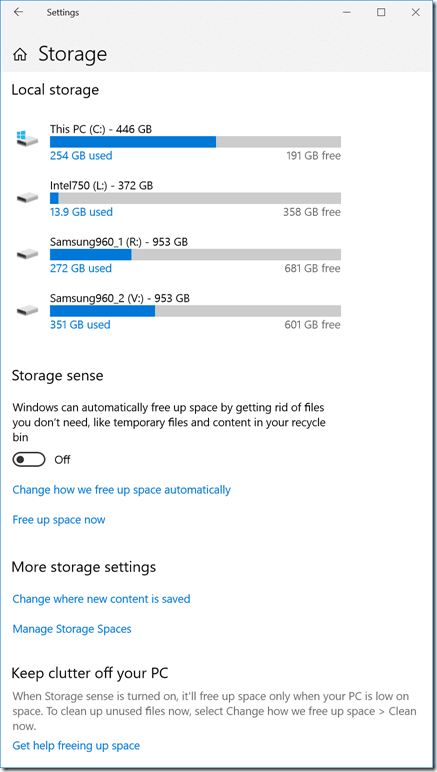 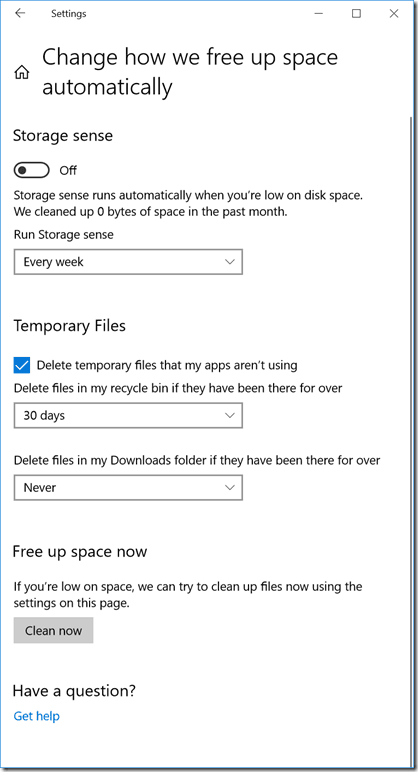 I have also developed a T-SQL script that you can use to check whether your instance of SQL Server has been patched to mitigate against the Spectre/Meltdown CPU vulnerability. This works for SQL Server 2008 through SQL Server 2017, for on-premises and cloud-based VM (IaaS) usage. You can get the query for this here.